The WPIOP mineral resource is predominately comprised of hematitic and goethitic Channel Iron Deposit (CID) mineralisation.  Deposits occur as partly buried palaeochannels, originating from ancient river systems draining away from the Hamersley Ranges. These ancient river systems were filled with iron rich material which cemented together to form an iron-rich deposit resistant to erosion. Most of the WPIOP deposits are mesaform CID’s (Type I; Figure 1) shaped due to the weathering and erosion of the surrounding basement rocks therefore exposing the palaeochannel deposits over time. Two of the CID deposits, Buckland Hills and Red Hill Creek, occur in the upper parts of the palaeochannel systems they occupy and are valley constrained deposits (Type II; Figure 1).  Distance from source, iron material type, ancient river setting and current conditions, including exposure to water, determine the grade of the CID.

The Hardey Bedded Iron Deposit (BID) is hosted by the Hamersley Group which is comprised of bedded iron formations (BIF) and sediments. Within the Hamersley Group stratigraphy the Marra Mamba and Brockman Iron Formations are the two major units hosting iron ore deposits. Both these Formations are comprised of alternating sedimentary layers of BIF, shale and chert. The highest-grade BID has been upgraded by chemical and weathering processes which remove much of the shale and chert. Iron mineralisation occurs as a result of multiple phases of supergene enrichment and burial metamorphism. 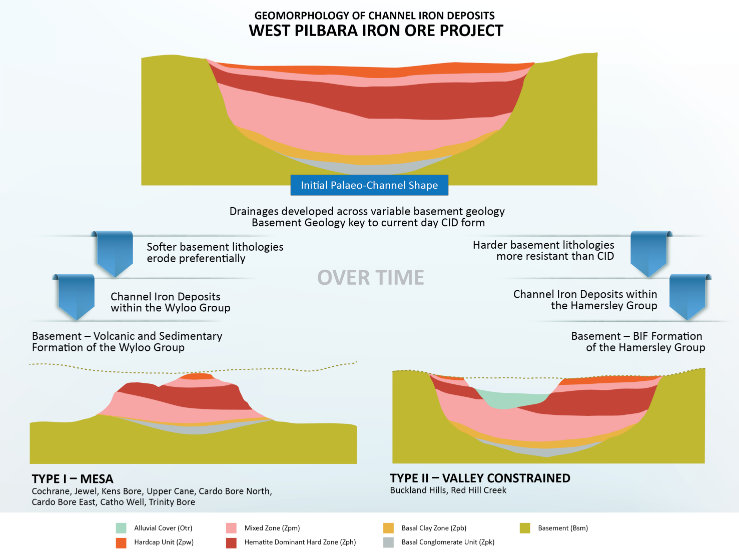